The Future of Travel event, hosted by Women Corporate Directors Group (WCD), observed Tim asking Ted Christie, CEO of Spirit Airlines a series of questions about airline travel and the impact of the pandemic both operationally and commercially. Noting that one of the main strengths of the industry had been through acknowledging weaknesses and adapting to new ways of working. Tim was keen to hear about Spirit Airlines’ main challenges throughout 2020 from Ted’s perspective.

Ted stated that his biggest concern had been his people. “We were facing a crisis – and I have been through many, including 9/11 – but the pandemic was something I had never seen. I was up late many nights worrying about the team’s health and safety and mental state. But they outperformed my expectations and together we crushed everything we needed to do. We’re now on the list of most admired companies and I couldn’t be prouder.”

Spirit has been able to weather the storm of the pandemic due to their consistent low-fare business model where most of their actual profit is generated through ancillary purchases from the VFR crowd or “visiting friends and relatives.” Many of the larger “oligarch” airlines who rely mostly on the high-yielding business class traveler have been unable to sustain their old way of doing business throughout the pandemic which may cause permanent damage to these airlines in the future, forcing them to look at pricing differentials and further consolidation in the industry because of this.

As a highly regulated industry, Tim was also keen to hear Ted’s thoughts on whether regulations are helping or hindering airlines. Spirit Airlines has always had excellent relationships with regulators, however ever-changing restrictions throughout the pandemic brought new challenges. “Unfortunately, we’ve seen some physical and verbal altercations on board our planes involving customers refusing to wear masks, and in those situations,  regulation has been positive. Other aspects of regulation, such as the possible introduction of mandatory testing, has not been as positively received by the industry due to the devastating effects this would have on consumer demand which could lead to the bankrupting of airlines. Thankfully the plans for mandatory testing have been set aside, but it’s something which is still a concern for us.”

The ongoing focus on environmental, sustainability and governance (ESG) issues were also discussed. Spirit has a number of initiatives in place to ensure the airline’s fleet is as environmentally friendly as possible. These include an increased number of seats on their planes – realizing a car pool effect – as well as a younger fleet which is more fuel efficient. Governance at Sprit Airlines now has an enhanced focus due to a very active non-governmental committee as well as proactive shareholder communications.

The recovery of the cruise industry was also a key talking point. A large part of GMT’s business involves flying passengers and crew to cruise ships and therefore GMT has close relationships with a number of large and small cruise lines. Tim expressed his expectation that cruises will eventually return to previous level, but not until late 2022 or 2023.

Tim said: “Cruise lines are looking into the future, but equally there is a lot of short-term work to do. There is a need to reassure passengers through advertising; there’s the introduction of rapid testing before, during and after voyage; the consideration of vaccination passports for all passengers, and finally the possibility of having all crew vaccinated so consumers can feel totally at ease when travelling. The cruise industry will evolve – there is simply too much demand to let it fail.”

The interactive event generated a final questions and answers session from WCD members covering topics such as racial/gender diversity, growth of the Spirit fleet, health and safety of flying, and climate change. 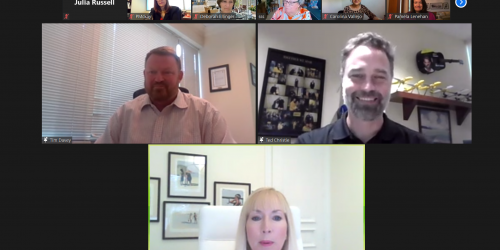